NAS stands for Network Attached Storage. It is a storage server which is used especially for file-sharing across the network. It removes sharing and storage responsibilities from the main server and makes performance much better.
As it is network attached hence it supports various file sharing protocols which makes sharing across network very easy. NAS server is the best option for secure storage.
There are many ready-made NAS servers which are available in the market such as:

Either you can purchase NAS from the companies mentioned above or you can build your own. Yup! That sounds amazing building your own NAS server is the best experience ever had if you have enough curiosity to learn new things and want to build your own NAS server.
So now you have many questions coming in your mind like how to build NAS server? What are the things I need? What will be the cost? How to configure? So let’s get some more information about NAS and it’s building steps.

Why you need NAS?

There are plenty of reasons why you should have a NAS server at your home or office or whatever the place you are working or your data will be there and you need that data all the time available secure.

Setting up NAS is very easy to set up, for that there is no high-level knowledge required. You just need to plugin the drives in the NAS, and provide power supply and network connectivity according to your requirement either wirelessly or wired. There is no need to attach all hardware things because in ready-made NAS everything will be there like RAM, processor, etc. And in a fraction of time, your data will be in the NAS.

2. Good for a long run in the context of time and money

If you are using any cloud service right now which is suppose having 2TB storage, you are paying approximately 80$ to 100$ per year for limited storage. But if you invest 500$ to 700$ once for creating a huge NAS. There is no limit of storage, it is flexible and expandable.

Every NAS has some different encryption techniques by which a user can encrypt drives while creating volumes. User can keep it from the public internet. And especially in organizations, you can establish centralized NAS and can easily avoid providing access to every individual PCs which can make a huge effect on security in a positive way.

4. No need of ISPs outages

Normally NAS server is connected with wifi or gigabit/megabit connection. So there is no need of any ISP crap and if your cloud is in maintenance and still there is no problem if you configured your NAS properly then it can tolerate few failures easily.

The most irritating issue that we all are facing nowadays is the lack of storage capacity. Suppose there is a YouTuber and he has 4 drives on his desktop and wants to transfer that 4K videos for editing and uploading because there are many people working with him.
So instead of transferring those file using some external HDDs, NAS comes with a better option. It is expandable and can give access 24*7 so it saves a huge amount of time and improve the productivity of work.

As this is network attached storage it supports different file protocols according to the operating system like SMB(Server Message Block, Windows file shares), CIFS/NFS(Network File Shares, UNIX file shares) and AFP(Apple file shares). So it is easy to make file-sharing among various operating systems.

The number is nothing to show a list of reasons as you’ll buy and start using NAS server or you’ll build a NAS server than you’ll come to know there are a lot more reasons to use NAS server. NAS server has its own operating systems provided by the organization if you want to manage something or want to make a change in the configuration you can access the UI using the normal web browser.

Each has its own functionalities, pros & cons. Today we will see about the FreeNAS operating system that is developed by ixsystems. We’ll see about the version, features.

Let’s talk about the features of FreeNAS:

Easy File sharing: As mentioned above it supports file-protocols according to the operating system so file sharing is very easy. It also supports iSCSI(Block Sharing) and WebDev method of sharing and iSCSI supports VAAI(vShpere Storage APIs Array Integration) of vmware and also support Microsoft ODX and Microsoft server 2008 and 2012 R2 clustering.

Data Protection: When it’s about data protection there is OpenZFS that is specially designed for data integrity from top to bottom. For individual protection there is RAID and FreeNAS supports different levels like RAID level 0, 1, 5, 6 and 10.
Volumes of FreeNAS screen each possible parity arrangement list based on how many drives are selected by the user at the time of the creation of volume.

Periodic Snapshot is the best feature of data backup and restoration. FreeNAS capture snapshots of every single dataset at the given interval of time (that interval time will be decided by the admin) and for a given amount of time i.e, 1 month 2 weeks, etc.
In case of any failure, admin can restore the data from that snapshot. And snapshot can avoid cryptolocker and ransomware so easily.

Encryption: According to 1 article of FreeNAS forums “FreeNAS is the first and only open source project to offer encryption on ZFS volumes”. Admin has the option of full drive encryption at the time of the creation of volume and that encryption is AES-XTS and that can be hardware accelerated.

User Interface: When you installed FreeNAS on your custom build NAS or you purchase NAS from any vendor at the time of configuration there is command line interface which is available but if you don’t have that much good command grip in Linux then there is option of User Interface which is accessible through web browser of system.
It has very good user-friendly legacy web user interface which is now updated in last update 11.2 that latest updated UI is developed using AngularJS. Figures given below shows the new and old web GUI of FreeNAS. 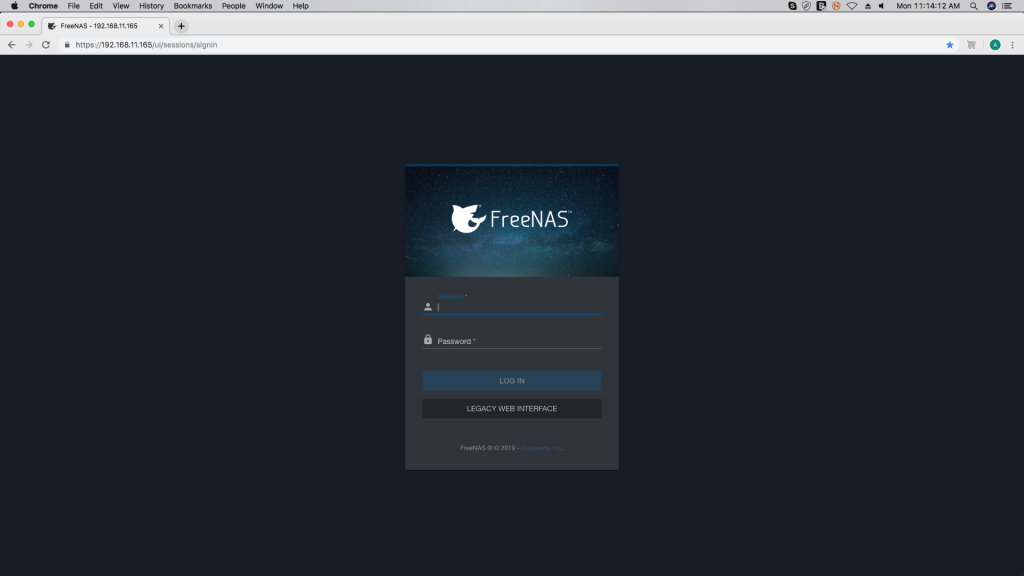